SPEAK TO OUR EXPERTS

Next to Sahara, the Gobi desert is the second largest desert in the world. However, unlike other ”deserts” the Mongolian Gobi is composed of a unique mixture of floras, faunas, oasis, rich wildlife and the unique culture of the nomadic camel breeders who inhabit those lands. This tour would provide you an introduction to the wildlife, nature and people of this region in equal measure.

Facts for the traveler 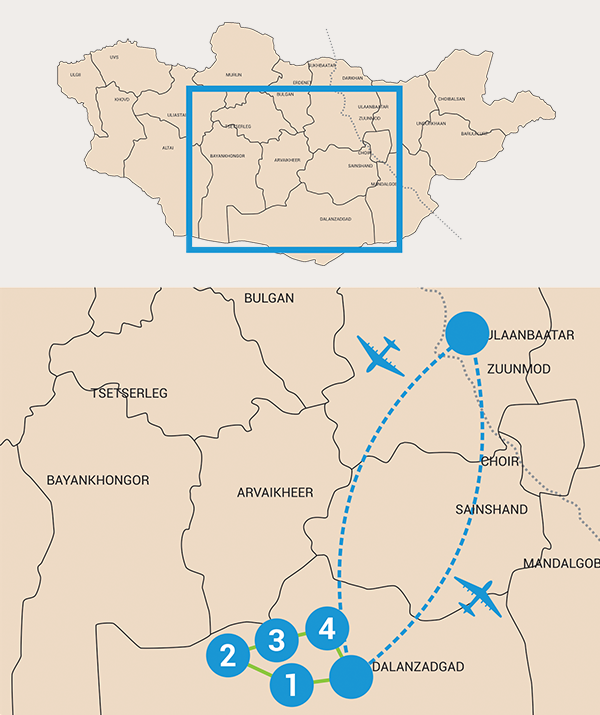 In the morning (Ulaanbaatar to Gobi: 07:00 AM – 08:20 AM), fly over the vast steppe land to the Gobi (1.5 hours), Mongolia’s southernmost province of consisting of a semi-arid desert. Contrary to the sterile sameness to the word “desert” suggests, the Gobi holds many fascinations including sites of some of the most important paleontological discoveries of this century. For the next three days, you will explore the stunning landscape of the Gobi, habitat for Bactrian camels, Argali wild sheep, goitered gazelle, golden eagles, saker falcons, jerboas – similar to kangaroo rats – and many endemic reptiles. The Gobi is also home to some of the Northern Hemisphere’s rarest and most elusive mammals such as dhole, snow leopard and Gobi Bear.
Upon arrival, drive to Yol Valley National Park (2.5 hours), a mountain range cradled between the foothills of the Altai Mountains. An ancient river carved this surprisingly green valley. Now, its remnant streams create ice formations at the base of the valley that sometimes persist as late as July. A hike through the valley allows you to discover habitat for indigenous vulture-like lammergeyers, Altai snowcocks, ibex, yaks and Argali wild sheep. Enjoy visiting the local natural history museum for an overview of the flora and fauna of the area. Next, transfer to Three Camel Lodge located at Gobi Gurban Saikhan National Park. Overnight in gers.

Wake early to the sight of the sun rising over the vast Gobi landscape. Following breakfast, start driving to Khavtsgait to see the amazing artwork of our ancestors. Preserved at the top of the mountain are some of the precious petroglyphs of the Gobi, ancient and beautiful works of art that can be clearly seen as the sun hits the rocks from the right angle. After lunch at the Three Camel Lodge restaurant, Gobi Oasis, travel to visit a local cooperative making traditional handcrafts. In the late afternoon, begin driving to Tugrigiin Shiree (1.5hours), a white escarpment where the famous “Fighting Dinosaurs” fossil of a Protoceratops and Velociraptor locked in combat was discovered in the 1970s. Return to the Three Camel Lodge to enjoy drinks on the lodge veranda or join the lodge chef to learn to cook Mongolian traditional dumplings.

After a leisurely breakfast drive to the legendary Flaming Cliffs (1 hour), named for the red-orange sandstone that glows brilliantly at sunrise and sunset. It was here in 1923 that Dr. Roy Chapman Andrews and his exploration team from the American Museum of Natural History found the first nest of dinosaur eggs the world had ever seen. To the trained eye, the ancient formations of the Flaming Cliffs are rich with fossils, and paleontological expeditions continue to make significant discoveries at this site. You will enjoy the Gobi sunset at this magnificent site.

After a leisurely breakfast drive to Moltsog Els (1.5 hours), one of the few regions of the Gobi covered by sand dunes. Explore the area on foot. There will also be an opportunity to learn the basics of riding a camel and exploring the area on camelback as well.

Day 5. Fly back to Ulaanbaatar

Excursions as per itinerary, entrance fees to museum and national parks, meals as written, accommodation in Three Camel Lodge, round way domestic flight ticket, guide service and all transfers.

Above price excludes the period of Naadam between 05th to 20th of July. For the price references of this period, please contact us.